It was wet and noisy outside today.   Every time we went outside to play water fell on me and there was this rumbling sound with flashes of light.  Mom decided that we needed to spend more time at indoor play today.

I had fun running circles around the couch and hiding my chew toys (I even hid one in Rocky's bed).   He didn't even find it when he laid down in it.   Hehe.   Mom also put some of my food nuggets in a little box (that said Olay) and I chased it all around the living-room, dining-room and kitchen trying to get it opened so I could get at the nuggets.  Mom finally opened one end of the box and after spinning it around they fell out.  Woohoo!  Yummmmm.   I really liked that game.

I also played with some of my other toys and rolled them under the low riding coffee-table so I went under the table to fetch them out.   Last I looked, there is now a box under the coffee table so I can no longer go under it.   Too bad... I like diving under things.

After I tired myself out, I snuggled-up with Mom.

After dinner, Mom decided that I should pose for some photos.  Hummmm.  I really don't get this posing thing.  She put me in one of her camera bags and I had to climb out of it.  What's that all about? 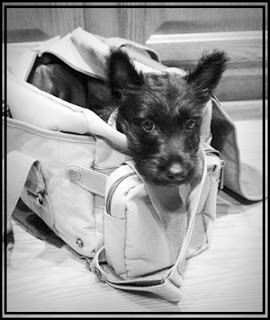 She also had some sort of plans with a green hat, but I foiled that plan and pounced on it.


I'm hoping for some more sunshine tomorrow.
Posted by Ranger at 9:17 PM

Email ThisBlogThis!Share to TwitterShare to FacebookShare to Pinterest
Labels: puppy