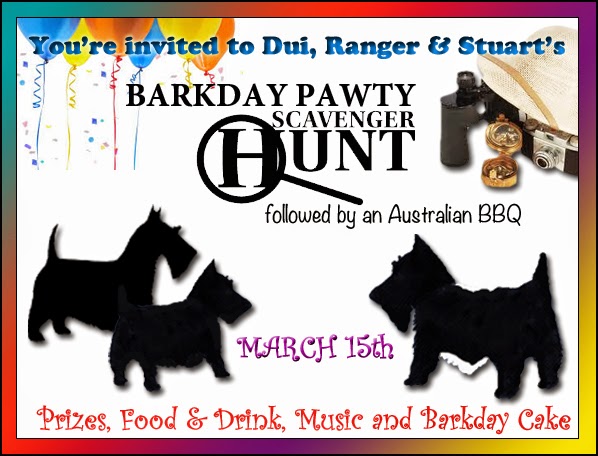 Great Scots!   Dui is turning 1, Stuart is turning 9, and I'm turning 3.   Wow..... time really does flies when you are chasing squirrels.

We are throwing a Barkday Scavenger Hunt Pawty.    There will be 13 (for our combined years) items dat y'all will have to find on our blogs.

On March 15th EST (dat's March 16th for Dui), we will throw our Australian BBQ Barkday Pawty.    It's going to be a blast and we may all learn to speak like an Aussie.

If you'd like to help out wiff Food, Drinks, Music or da Cake.... just let me know.

Email ThisBlogThis!Share to TwitterShare to FacebookShare to Pinterest
Labels: Barkday

It's dat time again to look ahead at all da fun things to celebrate in March, so I got on my yaptop and googled up your list.

I LOVE March cuz it's my Barkday month.   Dui, Stuart and I are all celebrating our joint Barkday on March 15th (more on dat later)    Let's get to da list.

26 Make Up Your Own Holiday Day (Could be a fun Blog hop if anyone wants to sponsor it?)
26 National Spinach Day

28 Something on a Stick Day

For other fun events, check out our Blogville Calendar.

Ya see, we live in da south (well maybe it's da north - NC) and at da coast.   We rarely see dis white stuff.

Now I'm not really sure what to do wiff it?   What do you like to do in da snow?

As you probably know, Frankie & Ernie are hosting a guyz day/night out and dar will be loads of fun stuff for us guyz to do.   Da big day is March 23rd so Save da Date. 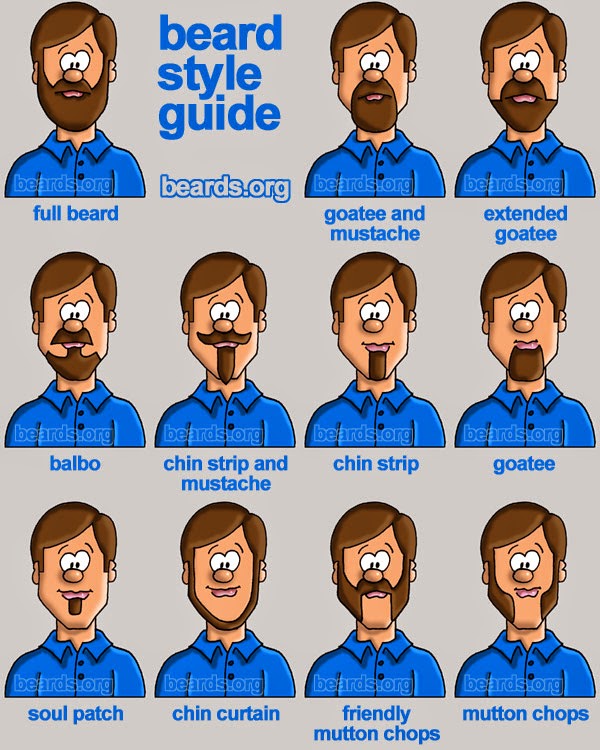 I will be hosting a Best Beard contest (real or artificial) so start growing your beards now.

Dar are so many options as you can see on beards.org.   Yep... dar is a real website for beard styles.   Cool huh?

Send me a pic of you wiff a beard to scottierangerATgmailDOTcom.   Da Deadlion is March 16th.

According to da Wacky Holiday list, today is "Love Your Pet Day".
I thought da I would share a flashback of me being loved by Mom's niece Alana when I was a wee little laddie. 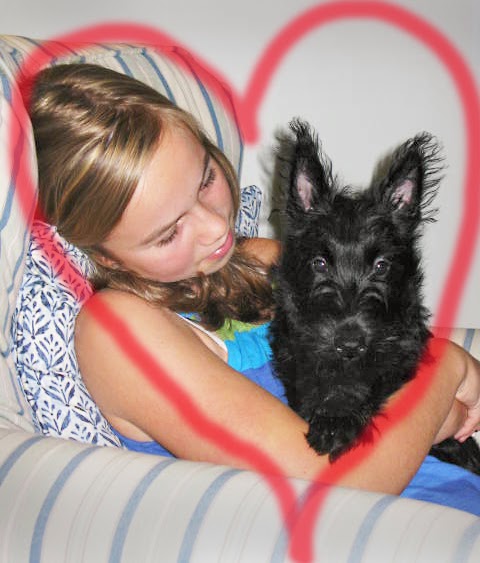 Arrrrrroooooooo..... I love a parade!

Do you know your Chinese Zodiac sign (da year you were born)?

Have a grrrrrreat day and I hope you get loads of good fortunes in your cookies today.

Email ThisBlogThis!Share to TwitterShare to FacebookShare to Pinterest
Labels: Winter

Guess what....... my girlfriend's Birthday is today!
Yep, she is a true Valentine Girl.

Pop on over a leave her a Birthday greeting.

I am da luckiest guy, as I get to escort da Birthday Girl to da Heart 2 Heart dance.
Doesn't she look pretty in red? We're off to da Dance now.


Join us at da dance, which is hosted by our Mayorz Stanley & Murphy.
See ya dar.

I know dat it is Friday da 13th, but I feel real lucky today because I get to go to dat H2H dance wiff da prettiest girl.

I can't wait for the BIG Valentine's Day Dance.    I'll be escorting my sweetie, Daisy.   She is a grrrrrrreat dancer.   I just hope dat I don't step on her delicate paws.   Maybe I should get in some practice time today. Hope to see ya dar.


Pees.....  here is Mom February block of da month for her calendar quilt. 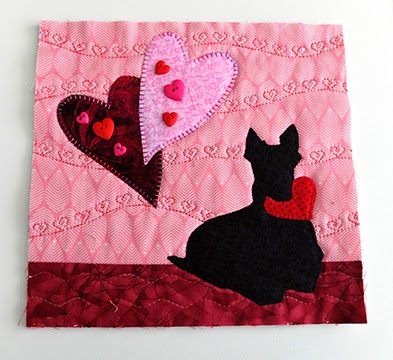 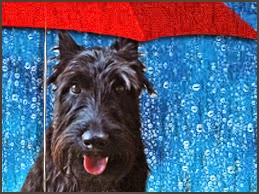 Yo...... according to da Wacky Holidays list, today is Umbrella Day.

And guess what?   It's raining today!   Isn't dat amazing.

As you know, Mom is a quilter.   Her Quilt Guild had a challenge to make a HOUSE wallhanging quilt. 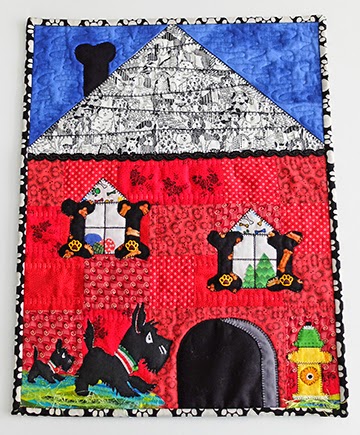 Here is Mom's quilt entry and guess what..... she won a Viewers Choice Award for it.

It's going to be on display in a local gallery (wiff da other houses) and den at da March (Quilters by the Sea, Wilmington, NC) Quilt Show.   Maybe she'll win another award.  We got loads of doggie lovers here and it's hard not to vote for a Scottie. 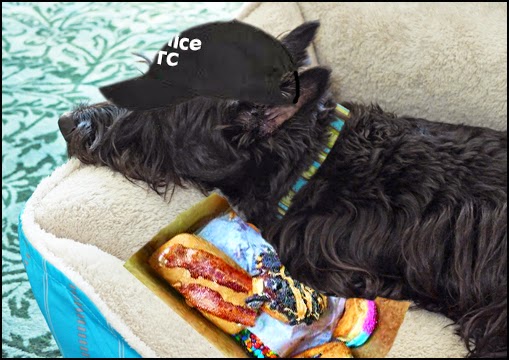 Are you ready for your Field Test on all da skills dat you learned dis week?

Now I can't show y'all da Testing (for security reasons), but I did take a few snapshots of da recruits in action.

Ranger:   Hummmm.... maybe I should confiscate that evidence.    Can't have the recruits on a Sugar High again.

Welcome back to Day 4 of training. 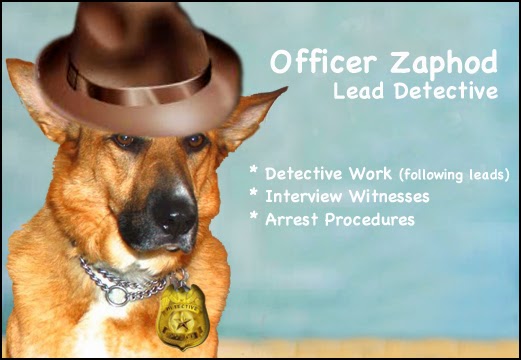 Here's whats on the schedule for today.

I'll be working on my Field Testing plan for the recruits.   See ya tomorrow.

Welcome back to Day 3 of Pawlice recruit training.


Today we will cover:


Have a good class and remember dat Officer Sidebite and I will be watching.   Right now I'm taking a break for all dis training.

Following da lecture Officer Sully & ME will run you through some skills exercises. Let's practice some patrolling on our Segways.  Segways are a great, fair weather, patrolling vechile and are new to da Blogville Pawlice Force.   They are fun too. 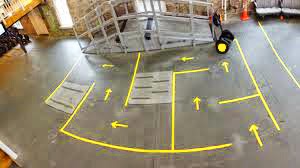 You each take turns rolling through our Segway course.  Keep your walkie-talkie on so you can hear any additional commands that Officer Sully or I may call out to you.

The recruits continued to cruise the track on dar Segways (Patrol machines). 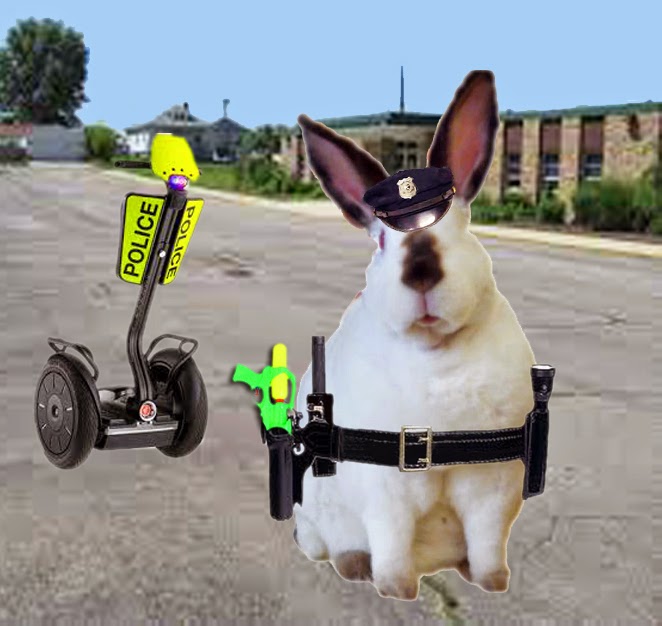 Looks like y'all have something to celebrate tonight.
Now, don't stay out too late pawting with Speedy as tomorrow is another full day of training.

Now Get Out of Here!    Class Dismissed.
See y'all tomorrow.

Now it's time to learn all about some of the Tools and Weapons that you will be handling.

Your number 1 tool is your senses (eyes, ears, and nose).   They are invaluable tools of our profession.   Always stay alert and you will be a top officer.

Here are some other tools that you will be using.

Officer Sully will discuss usage and protocol for using this key communication tool tomorrow.   Handcuffs will also be covered in other classes.

Other Officer tools and include flashlights, batons, mace, and taser/shock collars.

Flashlight tactics - Shining a flashlight in a criminal's eyes can temporarily blind dem.   They are also used in tracking and searching for evidence and criminals.
Batons can be used to temporarily daze a criminal or to trip dem.   They are NOT used for twirling.
Mace can be use to temporarily blind a criminal, giving your time to cuff dem.   Be careful not to point da mace can at yourself or to confuse it wiff your fur spray.
Tasers/Shock Collars can be used to to spot a criminal and detain dem.   Be careful not to taser a fellow Officer.


Now it's time for Weapons handling.

Rule #1:  We use weapons Only to detain da criminals.  Criminals will be brought before Judge Frankie’s Court.

We only use water pistols, poopie pellets, and tranquilizer darts in the Long Rifles.

Junior Officers will initially be assigned water pistols.  Most criminal do not like water and will be stopped by dem.   You can also load dem will jelly and you will find dat criminal frequently stop taste da jelly when hit.   This will give you time to cuff dem. Rodent Patrol Officers will also have use of Long Rifles with tranquilizers.    Right now, Office Ruby Top Cop Sidebite, Commissioner Sarge and myself are da only ones trained and allowed to use this weapon. 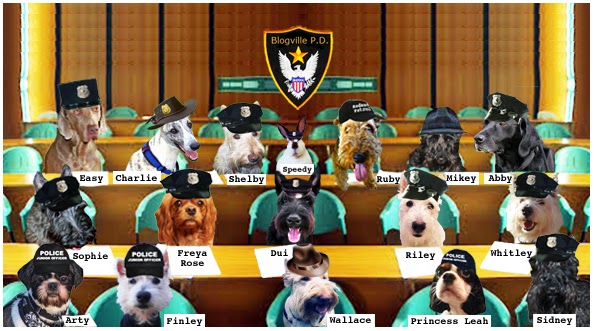 Sophie:   How do I clean my water pistol?
Ranger:  You must clean your weapon daily.    Jr. Officers should use soapy water and shoot bubbles until dar weapon is totally cleaned.

Freya:  I'm a Beach Patrol Officer, can I use salt water to fill my pistol?
Ranger:  Yes, but you should still clean it daily wiff tap water so da salt doesn't clog your pistol.

Princess Leah:  Can I use pink fruit punch in my pistol?
Ranger:  Sure

Easy:   I just wanted to mention dat Full Officers should not load dar poopie pellet pistol with fresh poop.   From experience, I can tell you that it will clog da pistol.   Oh, and cleaning it will be nasty.
Charlie:  Crikey Easy.....now that would be a poopie slider.   Baaawwwaahaaaa.

Ranger:  And now..... we'll head outside to practice wiff our weapons.   All Jr Officers should pair up with a Sr. Officer and they will show you how to load, shoot, and clean your water pistols.    DUI!  Wear are you going?
Dui:  I just wanted another donut.
Ranger:  You can have more donuts AFTER your your weapons practice.
Sidney:   Arrrrrooooooo...... did someone say donuts?
Ranger:  NO DONUTS until after weapons practice.

Fill you pistols wiff your favorite fluid and start practice  shooting!
NO Ruby..... do not let them fill dar pistols wiff margaritas.


Whitley:  Hey fellow Jr Officers.... Detective Wallace just told me dat we can get some extra credit if we all tag Ranger.    Are you in?
Jr. Officers:   YES.   Let's go!