Arrrrrrrrrrrrrrrrrrroooooooo!   Yesterday morning, I got to go for a walk on da beach.  It's one of my favorite places to go.   We had to go real early in da morning, before it gets too hot.
While I was walkin, I spyed a message in da sand and it was for ME!   Holy Batman! 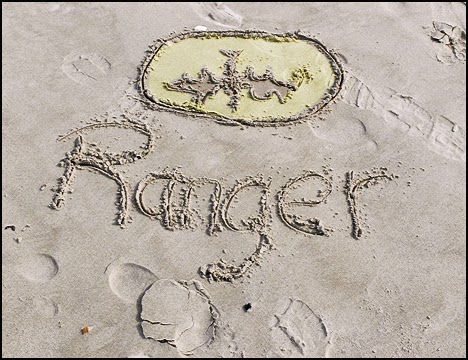 What does it mean?   It means dat it's time for a Bat-Cave Pawty update.

Gotta run now and check out da line at Bat Photo Booth.   Hope to see y'all at da pawty. 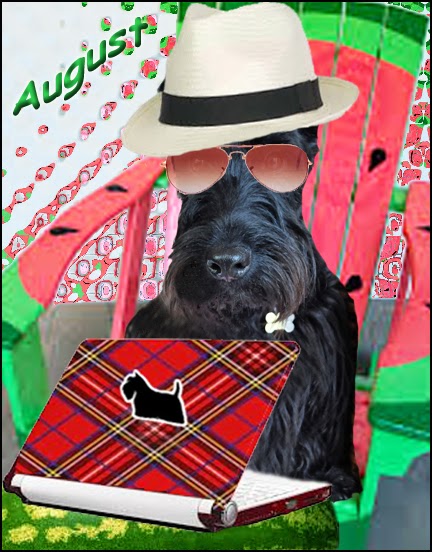 I did my googly research on my yaptop today and here's some wild and crazy things to celebrate in August.

5 Work Like a Dog Day (I do dis everyday)

7 National Lighthouse Day (Looks like I need to go to da beach today!)

19 Aviation Day (should I fly a kite today?)

28 Race Your Mouse Day (oh…. dis one is for all my kitty friends)

Have a playful Sunday!

Email ThisBlogThis!Share to TwitterShare to FacebookShare to Pinterest
Labels: furfriends 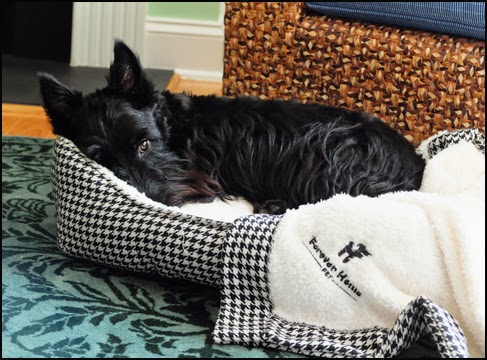 Here's my tail…...
Yesterday, I was all snuggled in for my afternoon snooze when da doorbell rang.

I ran to da front door and jumped up and down while Mom opened da door.   She found a shoe box sitting on da front porch and we saw da delivery man driving off to his next stop.

Drat…. shoes.  Dat box looks way to big for my shoes so it must be a package for Mom.
Mom snagged da box and read da label.  OMD….. it's a Special Delivery package for ME!   I checked out da label and it was from a Mr. Wayne in Gotham City. 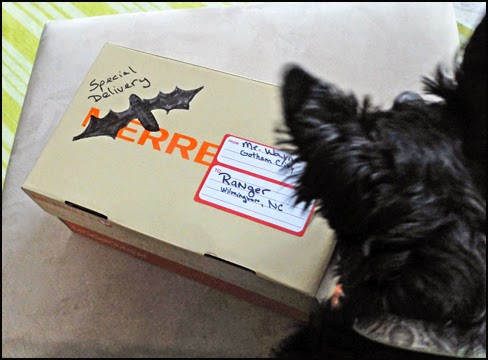 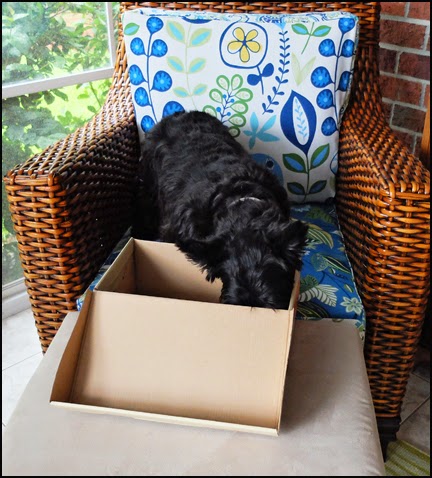 Mom gave me my package and I gave it da foodable sniff test.   Hummmmm…. I don't smell any foodables.  (Sigh)

When I opened the box I was startled to find an envelop wiff da Bat seal on it.  I never got me one of these before. 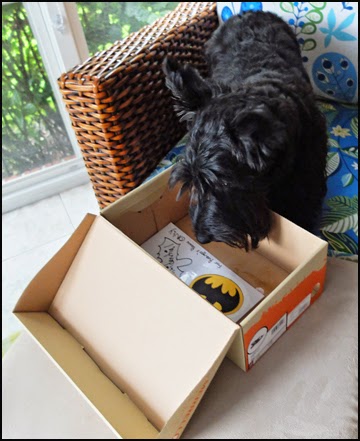 It was labeled "CONFIDENTIAL - For Ranger's Paws ONLY".
I quickly took to rippin open da envelope and you'll never guess what I found. 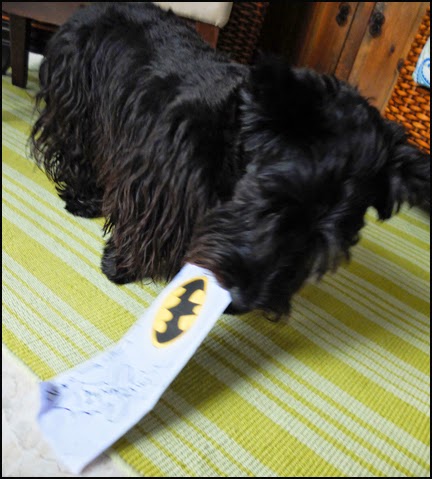 There was also a document wiff detailed structions, but I'm not allowed to show dem to you.   It's a Bat Family secret.    Da structions said dat after I study da map, I have to eat it so it would not get into villainous hands.   Now I have to tell you, da it did not taste or smell too good but I obeyed da structions and da secret map is save.    Oh… and da map in dis postie will self-distruct in 24 hrs.

So now I know how to get to da Bat Cave for our Bat Cave Pawty on Friday August 8th. You're probably wondering how you will get to da Pawty…. well, I'll meet ya'll at da Gotham City airport and my friend Alfred will drive us dar in a super big limo bus. 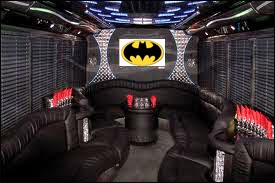 We have to keep da blinds closed so you can't see where we'll be going but we can watch movies while we cruise.

If you missed da Pawty announcement details,  Click Here to read all about it.   I hope to see y'all there.

Email ThisBlogThis!Share to TwitterShare to FacebookShare to Pinterest
Labels: FFHT

OMD…. Jasper and Nellie's mom saw this online and just had to share it with ME.


Thank you Jasper and Nellie, the two bestest maremmas in all the land, for sharing dis pawsome link of Scottie's on parade.

Pees…. Don't forget dat tomorrow is “Fractured Fryday Hairy Tails”.   I got my Tail all ready and can't wait to read yours.   Dis will be soooooooo much fun.   Thank you Murphy and Stanley for puttin dis event on.
Posted by Ranger at 9:41 AM 30 comments: 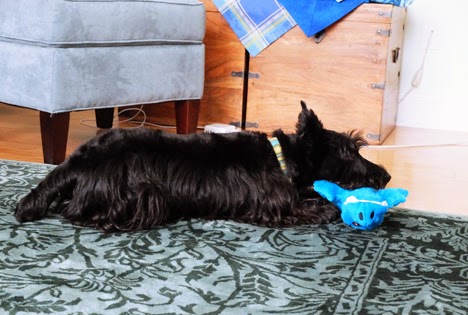 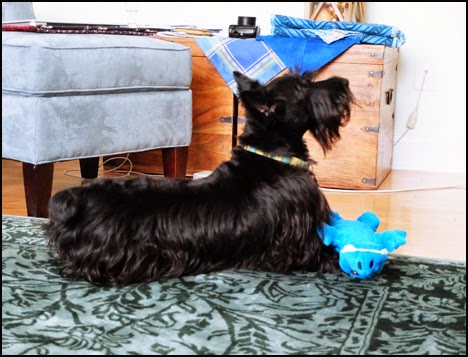 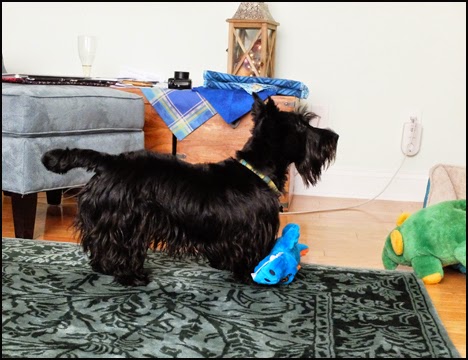 You won't believe dis, but I got special permission to hold a Pawty in da Bat-cave on Friday, August 8th.

We can play video games on the master consoles, ride up and down in da Bat-elevator tubies, watch Batman movies in da Bat-theater, and check out all da Bat vehicles.

Oh… and we probably should have to get some foodables and maybe some music.   Don't we have a band out dar?
If you got ideas or wanta help wiff food, music, games, whatever… just let me know.


Dis is a once in a lifetime experience.

Holy moly… I almost forgot to tell you to come dressed in your favorite Bat character.   Yep… it's a costume pawty too.   If you wanta come, send me a pic of you dressed as a Bat character by August 1st.   -or-   You can send me a head-shot of you and I'll put you in dat Bat photo-booth to transform you into one of da Bat characters.
Send your pics to scottierangerATgmailDOTcom by August 1st!

Pees…. Thank you Waggfoods, for suggesting we have a pawty in da Bat-cave.

Five weeks old and I already have my wee little Bat-ears up.

Not Wordless Wednesday. Not Batman?

My good buddy Braeden told me dat I might not be Batman.   So I did me some research on my yaptop.

Here's what I learned…..

Ace Ranger was a German Shepherd Scottie originally owned by an engraver named John Wilker.  He was found by Batman and Robin after his master was kidnapped by a gang of counterfeiters.  Batman used Ace Ranger to try to locate Wilker.

Because he had already placed a large number of "lost dog" announcements for Ace Ranger in his civilian identity of Bruce Wayne, he was concerned that anyone recognizing Ace Ranger (who had a prominent star-shaped marking on his forehead) might make the connection between Bruce Wayne and Batman. To forestall that problem, he hastily improvised a hood-like mask for the dog that incorporated the bat emblem as a dog tag dangling from Ace's Ranger's collar.  Ace Ranger was subsequently christened "The Bat-Hound Dog" by a criminal he helped Batman to apprehend.

Wilker later took a new job that made it difficult for him to take care of Ace Ranger, so he left the dog to Bruce Wayne.  Wilker was never aware that Ace Ranger was the Bat-Hound Dog or that Bruce Wayne was Batman.

At one point, Ace Ranger acquired super-powers thanks to Bat-Mite but this was short-lived.  For example; his specialized radio collar, when activated told him to don his own mask (via a hands-free device) and track down Batman and Robin.

He now lives in NC wiff his Mom and Aunty D.   Dar you have it!

Pees….. I also learned that we (da Bat family) have access to da Batboat, Batcopter, Batcycle, Batmobile, and da Batplane.   Cool huh?
Posted by Ranger at 8:54 AM 18 comments: 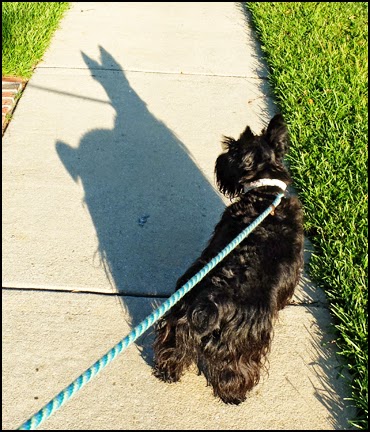 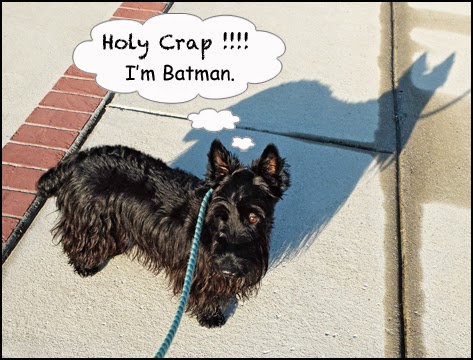 OMD… dis will change everything.

Yo Mom, I need to get me a really cool car and a Robin…. or maybe a bunny.

Email ThisBlogThis!Share to TwitterShare to FacebookShare to Pinterest
Labels: mischief

When I was a wee little laddie, dis was one of my favorite toys.

Frankfurters are great in da summertime.  Don't ya think? 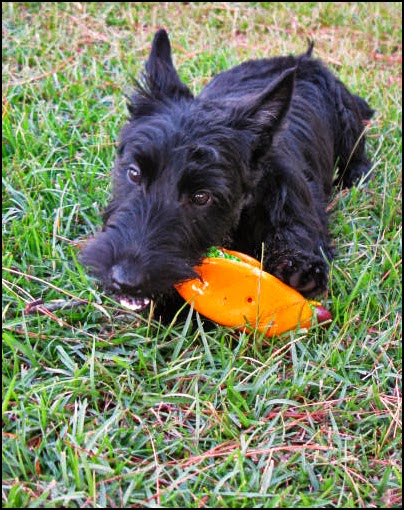 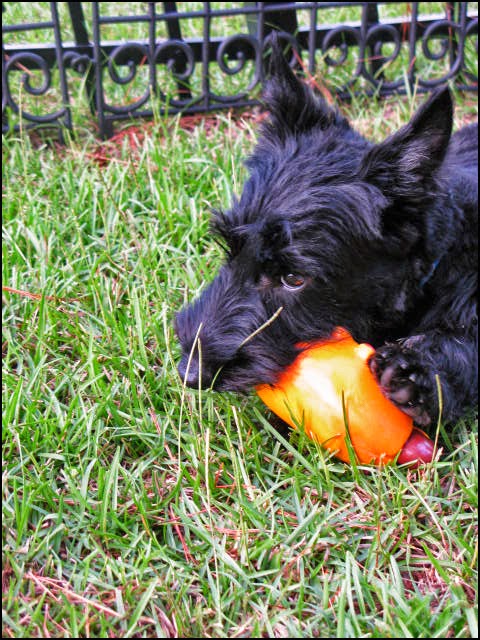 I don't have dis frankfurter anymore.   I kinda wore it out.
Now I have something even better.
I have a best furfriend named Frankie Furter.
Oh… and he squeaks too (if you pull his tail)!

And now for a wee little Friday Frankfurter waggery:
Q: What did the hot dog bun say to the hot dog?
A: Stop touching my buns!
Q: What do you call a hot dog with nothing inside it?
A: A "hollow-weenie!"
Q: What do get when you cross a chili pepper, steam shovel, and a Chihuahua?
A: A hot, diggety dog.
Q: What did the Mama Hot Dog say to the little frankfurter?
A: Ketch-up! 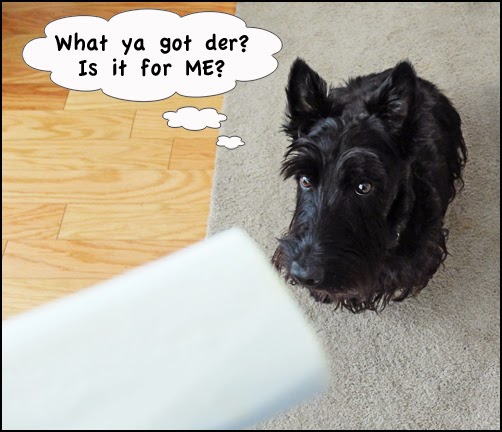 I must have done somthin really good to get me a BONE.   I get loads of cookies, but hardly ever, ever get me a BONE.
Ut Oh….. Mom looks like she is gonna snatch my new Bone away from me.   She is such an Indian giver.   She only lets me have it for a wee little bit.   I think dat she is afraid that I will eat off big chips and get sick.
My strategy worked for awhile, but den she bribed me wiff some cheese and den snatched my bone while I was gobblin up da cheese.

Do you get to have bones?   What type of bones does your Mom let you have?

Email ThisBlogThis!Share to TwitterShare to FacebookShare to Pinterest
Labels: Bone 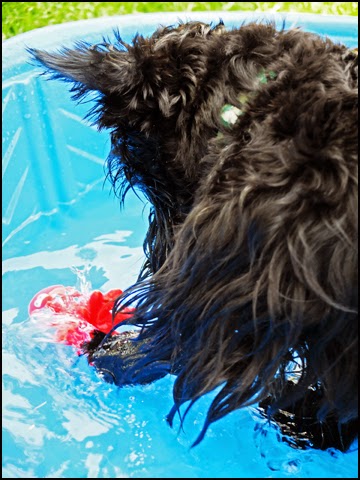 Email ThisBlogThis!Share to TwitterShare to FacebookShare to Pinterest
Labels: B&W

Dees Flashback pics are from my very first 4th of July photo session.   Mom set up pops and even put baby Me in a box.  She tried really hard to get me to pose, but I was having none of it.

I hope you have a wonderful 4th of July and dat you stay far away from dos loud noise-makers.  I'm gonna park myself under the foodable table.

Pees….  Authur, da One CAT, is all gone and he left me some new sticks/branches/twigs to play wiff.  Nice of him huh?

Mom says dat Hurricane Authur is right off our coast. 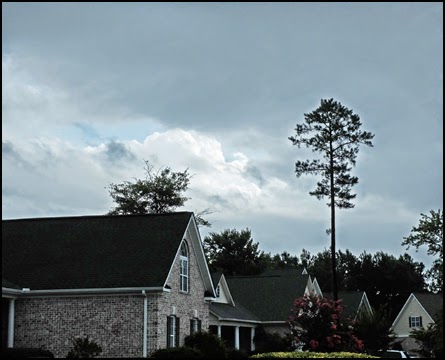 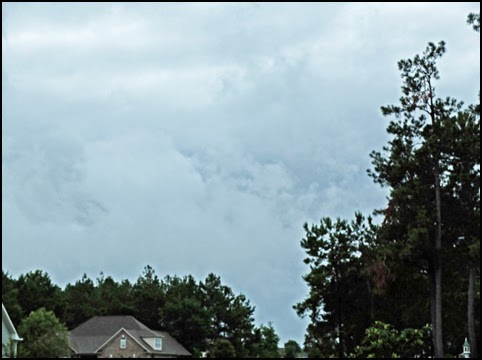 I don't like Authur cuz he delayed my morning walk.   We had to wait a bit until da rain band moved.   It's supposed to get worse later today… well at least dat's what da NC governor says.   Fortunately it is only a One CAT Hurricane.   Yup…. I said CAT!

Back to my morning walk…. look what I saw!
And as we hurried down da street I found some flags.
Gotta run… before it starts raining again.