Look-out Blogville… the Great Scots are takin over!
Pop on over and welcome Braeden & Seth.

You might recognize them…. cuz they came to my Pumpkin Patch on Howloween. 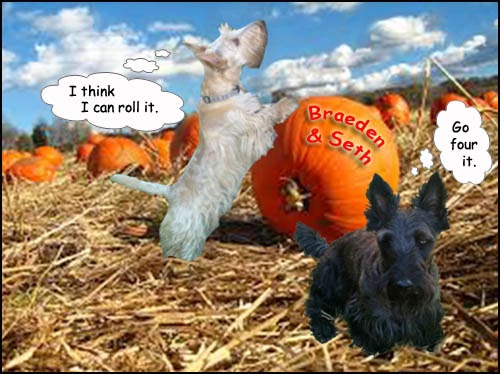 And now for some Scottie giggles.


The Scottie Dog Who Knew Karate by iambaker

There once was a young couple who lived in a town filled with crime.
After three neighbours' houses had been robbed, the couple decided to get a guard dog.
So one day the wife went to the pet store and said, "I need a good guard
dog."

And the clerk replied, "Sorry, we're all sold out.    All we have left is
this little Scottie dog. But he knows karate."

So the wife bought the dog and took it home to her husband who was
expecting a big guard dog. But then she told her husband that it knew
karate, and he said "Karate my ***!"